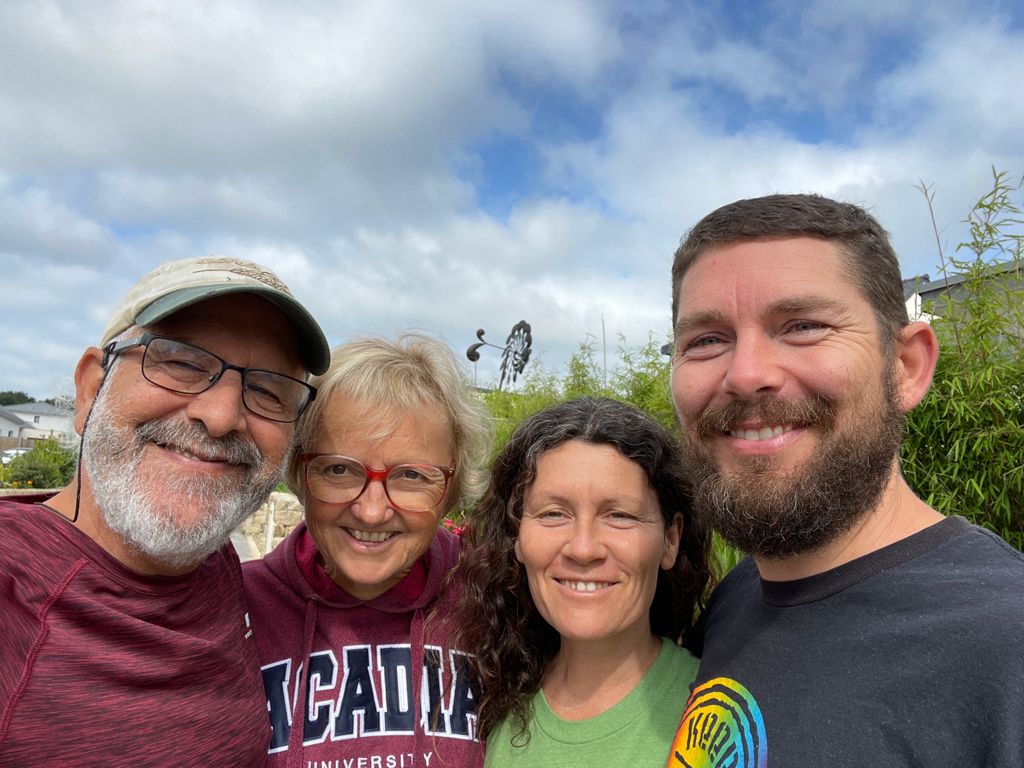 For the past 4 years Joni and Chris have been farming at Sweetwater Organic Community Farm in Tampa Florida.  Sweetwater is a 29 year old 501c3 non-profit.  Chris is the Director of the farm and oversees all aspects of the farm including finances, business partnerships, educational programs, produce sales, events as well as assisting Joni in the role of head farmer.  Joni is responsible for all daily operations of the farm including crop planning, production, greenhouse, equipment, cultivation, harvest, and marketing.   Joni and Chris manage 3 onsite apprentices, and up to 6 seasonal part time interns and weekly volunteers.  Sweetwater Organic Community Farm offers a CSA share and a weekly seasonal market onsite with numerous additional vendors, music, and workshops.  Current goals and projects Chris and Joni are working on at Sweetwater are working with the board of county commissioners of Hillsborough County to modify the planned development to include a small educational campground and education building on the farm.  The goal of paying off the mortgage at the farm in order to preserve the land is coming to fruition as the county has promised $250,000 in funds to be used this year to help pay down the debt, as well as a “Pave the Way to Your Forever Farm” campaign with a brick path.   Sweetwater farm acquired a building 2 years ago that sits on a major road and is developing a farm store and café.

Chris and Joni have visited and toured over 30 farms similar to their no till bio intensive model, in the US, and Europe, including Eliot Coleman in Maine, Jean-Martin Fortier in France, and Frith Farm in Maine, and studied books by each of those farmers, all with small scale biointentise market/CSA mixed vegetable production farms.  They have also participated in over 400 hours of workshops  and classes online and in person locally pertaining to small diversified vegetable growing practices.

Chris is currently the owner operator and founder of the International Guest House in Saint Petersburg Florida, where he resides with Joni and their 3 children, hosting over 8000 guests over the past 10 years.  In 2017 Chris founded the St Pete Eco Village and operated it until 2019.  One aspect of the Eco Village was its thriving community garden, with a CSA, and onsite market, hosting workshops and volunteers.  Chris gained valuable insight into money management as an investment associate at M&I Bank from 2008-2010.  Chris was a member of the Wisconsin Army National Guard, transportation specialist, finance specialist, and civil affairs, from 2001-2010.  Chris gained farm experience thru WWOOFing in Australia from 2007-2008 on three different farms after  attending the University of Wisconsin-Whitewater and receiving a B.B.A with an emphasis in entrepreneurship and real estate.  Chris attended Janesville Parker High School and was a member of F.F.A. from 1999-2002, where he went to State Championship dairy judging with his team and led farm tours for elementary students for Rock County Farm days.

Joni has been farming in the Tampa Bay region for the past 6 years under the guidance and mentorship of local urban agriculture experts, notably Rick Martinez, founder of Sweetwater farm and owner at Organic Integrity.  In 2018 Joni earned her Permaculture Design Certification locally in Tampa.  Joni volunteered at the St Pete Eco Village Garden for 2 years from 2017-2018 where she was trained in all aspects of no-till organic diversified vegetable production, including greenhouse, harvesting, pest management, cultivation, harvesting and marketing.   While there she expanded the offering to include a C.S.A, in addition to operating the weekly onsite market and delivering produce weekly to local restaurants.  In 2016 Joni became a member of the Sustainable Urban Agriculture Coalition, where she continues to participate in monthly meetings to exchange with the community and attend workshops.  Joni holds a B.F.A degree from Northern Kentucky University with an area of concentration in plant ecology.  Joni has WWOOF experience on organic farms in Australia in 2000 and Canada in 2007.

My love for organic farming is a long story, a journey that began in 1979, but first a little history. I am a third generation Tampa native who grew up in a loving family not very far from the farm. I played, fished, swam and grew up in the wonderful Tampa Bay watershed. It was so different from what is now around us. After graduating with a degree in Engineering, I worked as an engineer for a very short time before realizing my love for organic gardening. It started with small back yard gardens that got bigger and bigger and are still getting bigger.

It was not long before I had given up my career as an engineer and started my first experience as an organic farmer up in Pasco County. In the late 70’s and early 80’s there was not much information on organic farming, but it was a very happy time, fumbling my way through the learning curve of becoming a farmer, not knowing any better. I actually rode my horse from my house to my farm 5 miles away every day for work. This quickly evolved into specialty sprouts and culinary herb business servicing fine restaurants from Sarasota to New Port Richey and all points in between going through several evolutions. It all got very big and hectic. In 1987, I purchased the land that Sweetwater now sits on and moved from Pasco County back to my native Tampa. I came to very much love the special spot on Sweetwater Creek that is now Sweetwater Organic Community Farm. In many ways I was returning to my childhood, canoeing the creek, once again returning to the water shed I so deeply loved, once again much closer to my loving family. I quickly developed this tiny piece of land into a very special market garden supplementing my service to local fine eating establishments.

In about 1990, the organic certification world was starting to take hold. For some reason, I decided to attend a training for organic inspectors in Aurora, Nebraska. It was in February and brutally cold for a boy from central Florida. Little did I know my life was about to change dramatically. It just so happened that my skill set was perfect for an industry desperately in need of qualified professionals. Within a year or two, from the connections I had made in Nebraska, I was traveling the world inspecting organic farms and processing facilities. The organic inspectors formed an association called the International Organic Inspectors Association, of which I was soon elected to the Board of Directors and eventually became President. This experience launched my career as an internationally recognized expert in organic regulatory rules. It was all incredibly rewarding work. This opportunity continues today as my other career that many of you may not be aware of.

The down side was that with all that travel my beloved farm was rapidly becoming abandoned. It was weighing heavily on my mind and heart. One day in 1992, while lamenting this situation with a dear friend, I came up with the idea of starting a “community farm”. He thought it was an excellent idea and offered to be the first member. So in early 1993, Sweetwater was officially, well, maybe not so officially, born. We started with 7 members and fumbled our way through it. Little by little with the steady support of dear friends and family, Sweetwater began to evolve and bloom like some rare, unknown flower, with us all gingerly nourishing her growth, not really knowing where we were headed. Meanwhile I was traveling more than ever, visiting some of the most amazing farms in Latin America, Asia, the Caribbean, Europe, North America, thousands of farms growing anything from coffee, cacao, quinoa, sesame, grains, fruits, vegetables of all shapes and sorts, all the while collecting ideas for our own dear farm back home. As of late, I have lost the lust for travel and have become more and more a home body.

So much has happened during this journey it is hard to get it all into words. So many wonderful people have contributed their hearts and souls to our Sweetwater, have nurtured it and helped it grow from that seed of an idea to the unbelievably wonderful farm we now all call our own.

There have been so many ups and downs, funny stories, success and failures. During this time the bloom has blossomed to nearly 400 families. Over 10,000 school children have visited Sweetwater to learn about healthy food. It has all far exceeded my wildest dreams and imagination of what it would day become, and fills my heart beyond words. I am deeply indebted to all of you who have become part of the richest experience anyone could hope for. I thank our wonderful staff, those who are here now, who have come and gone, who all remain so dear to my heart. I thank all of our wonderful families, the children, many of whom I first met as lumps in their mother’s bellies as they rounded the share barn every week, the volunteers, musicians, vendors, the thousands of school children who have visited, all who have added their spirit to the tapestry we now call Sweetwater. This is truly the real reward, the true harvest of all our efforts.

The seasons pass, the fallow fields are tilled once again, nourished and seeded. With all of our past effort, all the love we have given the earth and each other, brings new crops, new faces, new people to share this special experience with. In this way, all those have come before, their efforts continue to live on. This is growing community from the ground up.

Each season I continue to be amazed, when I think it cannot get any better, it does. So here is my toast to our best season yet!! Thanks to all of you!!

See you all soon on the farm.