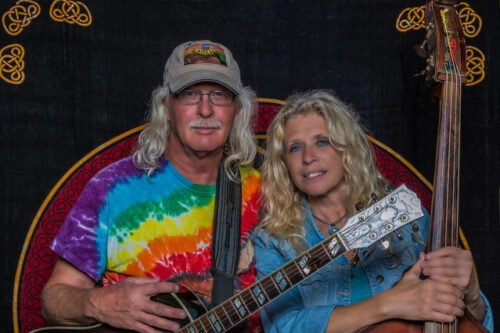 THE MASONS are a husband/wife, Americana Acoustic Rock duo, who began their musical adventure over 10 years ago. Logging 1000+ shows to date, the two have crafted a show of acoustic arrangements from the classic rock, country rock, and bluegrass genres and put their own Appalachian spin on familiar songs, as well as their original music. This has generated enthusiastic audience support for their performances throughout their home state of West Virginia, surrounding states, and their Winter home in South Florida.

THE MASONS are: Skip Mason on acoustic guitar & vocals, and Cindi Mason on “Momma”, her trademark upright bass & vocals.

They released their first, self-titled CD in 2014, and released their second CD, “Hard Life” in January 2019, while touring extensively in support of their music.  The duo continues to write, with plans to return to the studio to record their next CD in the upcoming months.

Deb Ruby is a roving songstress recently returned to the U.S. from 5 years of travelling the Americas, Caribbean & Europe. Originally from NY, currently nestled in St. Petersburg, FL.