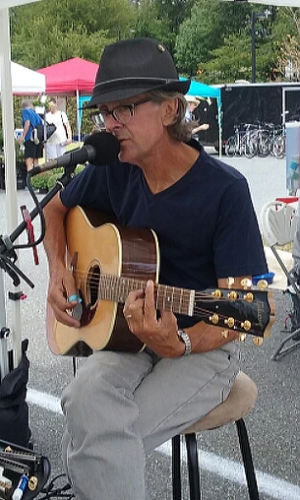 Born in the dark ages (1953) in Kansas City, MO, J Kolb moved to NH when he was a kid (still in the dark ages). He picked up the folk, singer-songwriter, protest singer thing in High School and all these years later is still at it. Those early influences; James Taylor, Bob Dylan, Tom Waits, Joni Mitchell, Bruce Coburn still resonate with him. His first CD “Way Beyond Midnight” was published in 2013. Huge thanks to Colin Ward, Rowland “Miggi Middleton, Mark Doran and Stephanie Ancona for helping put this project together. Next came a four song duo project with Miggi called “Sittin’ and Thinkin’. A self produced and self recorded CD “Floritopia” was released in July of 2018.
After residing in NH, Massachusetts, New Jersey, New York, Massachusetts, Maine and Maryland he and his wife Marci now live in St. Petersburg, Fla

Teacher, singer/songwriter, mother of 3, wife of 1

“… . humor, intelligence and deep musicality imbues her songs with an artfulness that is unusual . . . an adept story-teller and crafter of songs . . . Wildy Haskell, Wildy’s World Reviews