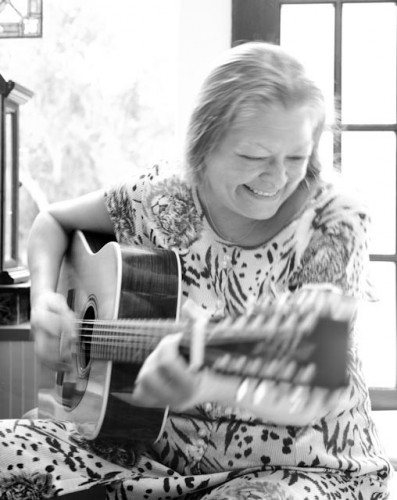 Mama Gina feels most at home when she can feel the earth beneath her feet and taste the freedom of the open sky. She is a Bard, singer/songwriter, fearless storyteller, and wanderlust. With down-to-earth, bluesy vocals, a bit of humor, and straight-ahead, rhythmic, acoustic guitar, djembe and frame drum, she tells the true stories that fall into her head and heart. She sings of life, death and rebirth. She sings of holding on and letting go. She speaks to the Gods and Goddesses of myth and they speak back. Boy, do they speak back. She sings their stories as they become her own. She sings of her spiritual connection to the natural world, and of our responsibility to nurture both the mundane and the magical. When she is not performing, you just might find her camping in the woods seeking inspiration from the earth beneath her feet and that vast, open sky. With four CDs and a digital single released, she is now exploring the fantastic and hilarious world of Nine Toes the Bard – dragons and drinking songs, oh, my – and you can be sure another CD is in the very real future. You can stream Mama Gina’s music for free at www.reverbnation.com/mamagina and learn more about her at www.mamaginamusic.com This Frontier Needs Heroes have spent the past 5+ years playing shows all over the world. Logging thousands of miles in their car, touring the greatest cities of North America and Europe, selling one record at a time, making one fan at a time. This determination and DIY ethos brought them on an epic journey around the world, playing clubs, houses, and festivals. This Frontier Needs Heroes is currently touring as a duo: singer/songwriter Brad Lauretti and vocalist/violinist Sadie Frederick. Originally from Brooklyn, NY they are now based in Jacksonville, FL.

Check them out at: http://thisfrontierneedsheroes.com/video