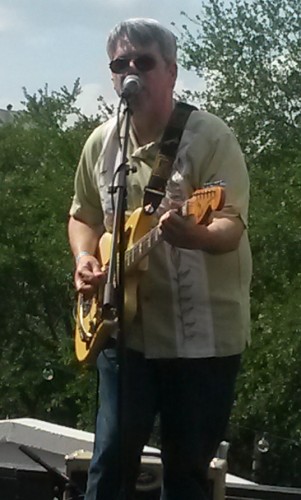 From his many years with Tallahassee rock legends The Casual Ts  to many sessions and live performances ranging from the avant-garde to musical theater to his 21st Century stints as frontman for Tampa Bay bands The Smoking Jackets, Silent Jones, and Botomatics, Bob Anthony has found many a platform for his command of and love for several musical styles, prompting Creative Pinellas to proclaim him one of our best local singer-songwriters.

On his own, Anthony calls upon his chameleonic musical tendencies at will; from  retroish pop-n-roll  to epic story-songs. His forte, though, may be the many instrumental flavors that spice a solo performance, whether haunting and atmospheric, rousing and ragtime or  full of dense textures and free improvisations .  Several of these pieces are collected on the all-instrumental Anthology CD, which Focus called a real treat for guitar lovers.  Anthony also likes to throw in a few songs he wished he’d written to answer the dreaded Hey, man, play something we know! plea. .

The Largo native has graced many stages throughout the Tampa Bay area as well as other points throughout the southeast and beyond, opened for national acts such as Slobberbone, Kevin Kinney , Alejandro Escovedo, David Dondero, Alex Chilton, The Replacements, played alongside Florida roots-rock legend Charlie Pickett, Acho Brother, SHIM, and others, and has received considerable airplay on Tampa’s WMNF-FM 88.5    Focus lauds Anthony’s guitar mastery and classic songwriting smarts while the Tallahassee Democrat calls his music intricately beautiful “to watch him play is to be fascinated and ultimately enchanted” .

Jimmy is a masterful finger-pick guitarist who not only has a vast repertoire of folk standards at his command but engaging, thoughtful and often inspiring original songs he has composed over the years.  Pete Seeger,  Ray Wiley Hubbard and Leadbelly are among his influences.