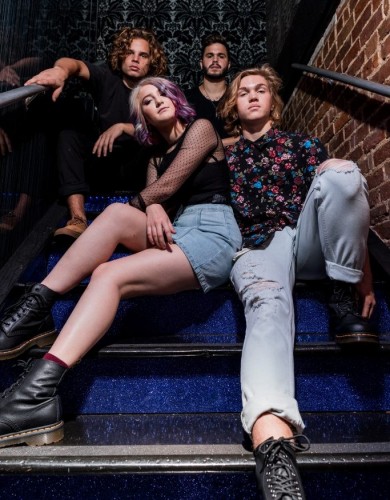 The Young Something ( formerly AB Positive ) is fronted by Alex Bonyata and Bella Beyer  who are based in St. Petersburg, Florida. They started performing and songwriting together when they met at the Grammy Museum’s Music Revolution Project during the summer of 2015. Since then they have expanded to a full band, adding two members: Ben Buffington on bass/keys and  Trey McHugh on drums. Now with two EPs under their belt they have been busy performing in Nashville, Austin, Arkansas, and all over Florida. They have been featured on WMNF Radio multiple times. Recently they recorded their premier EP as The Young Something in Nashville and will be releasing it later this summer. Live appearances have included opening and playing in support of Foreigner, Andy Grammer, Toby Keith, and Sister Hazel.

Dusty Starr Williams originally hails from Dallas Texas and currently resides in Safety Harbor. An accomplished singer/songwriter with an acerbic cowboy wit, his favorite quote is: ” When in doubt,  ask yourself, what would Jimmy Buffet do? ”