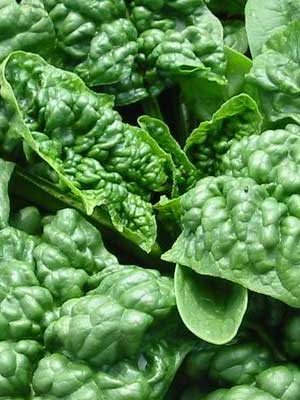 A dark green leafy vegetable which is one of nature’s highest nutrient density foods. It is a cool season crop and belongs to the goosefoot family along with Swiss chard and beets. Spinach is low in calories, and is a good source of vitamin C, vitamin A, and minerals, especially iron.

Calorie for calorie, leafy green vegetables like spinach with its delicate texture and jade green color provide more nutrients than any other food. Although spinach is available throughout the year, its season runs from March through May and from September through October when it is the freshest, has the best flavor, and is most readily available. Spinach belongs to the same family (Amaranthaceae-Chenopodiaceae) as Swiss chard and beets and has the scientific name, Spinacia oleracea. It shares a similar taste profile with these two other vegetables, having the bitterness of beet greens and the slightly salty flavor of Swiss chard.

Popeye popularized spinach, but it’s too bad he ate it out of a can. Fresh spinach retains the delicacy of texture and green color that is lost when spinach is processed. Raw spinach has a mild, slightly sweet taste that can be refreshing in salads, while its flavor becomes more acidic and robust when it is cooked.

There are three different types of spinach generally available. Savoy has crisp, creased curly leaves that have a springy texture. Smooth-leaf has flat, unwrinkled, spade-shaped leaves, while semi-savoy is similar in texture to savoy but is not as crinkled in appearance. Baby spinach is great for use in salads owing to its taste and delicate texture.

Short-Term Storage: Loosely wrap spinach in a damp paper towel and refrigerate in a reusable airtight container, plastic bag, or salad spinner for use within 3-5 days. Spinach is very perishable, so use quickly.

Long-Term Storage: Water blanch, or plunge the spinach into boiling water, for two minutes. Remove and immediately place in ice water. Drain the spinach after it is cooled. Transfer cooled, blanched greens into suitable containers (freezer-grade plastic bags, rigid plastic containers, glass containers or heavy-duty foil containers). As an alternative to blanching, spinach can be stir-fried until leaves are wilted (2 to 3 minutes). Cool promptly and then pack into containers as indicated above. For best flavor, consume frozen spinach within 6 months.

Choose spinach that has vibrant deep green leaves and stems with no signs of yellowing. The leaves should look fresh and tender, and not be wilted or bruised. Avoid those that have a slimy coating as this is an indication of decay.

Do not wash spinach before storing as the exposure to water encourages spoilage. Place spinach in a plastic storage bag and wrap the bag tightly around the spinach, squeezing out as much of the air as possible. Place in refrigerator where it will keep fresh for up to 5 days.

Avoid storing cooked spinach as it will not keep very well.

Wash thoroughly in an ice water bath to remove sand and insects and rinse. Cut off woody stems and remove damaged leaves. Try steaming the freshly washed spinach by placing the spinach with its clinging water droplets into a large pot or wok. Cover and cook, stirring regularly. Generally, the water on the leaves is enough to steam cook the spinach. You can also cook spinach in a steamer over boiling water for 5-8 minutes. If the spinach is to be used later in a more complex dish, you may want to blanch it in a large amount of water just until it wilts, then submerge in ice water to preserve its color.

Spinach should be washed very well since the leaves and stems tend to collect sand and soil. Before washing, trim off the roots and separate the leaves. Place the spinach in a large bowl of tepid water and swish the leaves around with your hands as this will allow any dirt to become dislodged. Remove the leaves from the water, empty the bowl, refill with clean water and repeat this process until no dirt remains in the water (usually two to three times will do the trick). Do not leave spinach soaking in the water as water-soluble nutrients will leach into the water.

Spinach sold in bags has been pre-washed and only needs to be rinsed. If you are going to use it in a salad, dry it using a salad spinner or by shaking it in a colander.

The Healthiest Way of Cooking Spinach

Spinach is only one of three vegetables we recommend boiling to free up acids and allow them to leach into the boiling water; this brings out a sweeter taste from the spinach. Discard the boiling water after cooking; do not drink it or use it for stock because of its acid content.

Use a large pot (3 quart) with lots of water and bring to a rapid boil. Add spinach to the boiling water and boil for 1 minute. Begin timing as soon as you place the spinach in the pot if you are using 1 pound or less of spinach. If you are cooking larger quantities of spinach bring the water back to a boil before beginning timing the 1 minute. Do not cover the pot when cooking spinach. Leaving the pot uncovered helps to release more of the acids with the rising steam. Research has shown that the boiling of spinach in large amounts of water helps decrease the oxalic acid content.

Remove spinach from pot, press out liquid with a fork, place in a bowl, toss with our Mediterranean Dressing, and top with your favorite optional ingredients. For details see 1-Minute Spinach.

Add layers of steamed spinach to your next lasagna recipe.
Pine nuts are a great addition to cooked spinach.
Spinach salads are a classic easy and delicious meal or side dish.

The following nutrition information is for 1 ½ cups shredded raw spinach (or 85 grams).

Spinach is an excellent source of vitamin K, vitamin A (in the form of carotenoids), manganese, folate, magnesium, iron, copper, vitamin B2, vitamin B6, vitamin E, calcium, potassium, and vitamin C. It is a very good source of dietary fiber, phosphorus, vitamin B1, zinc, protein, and choline. Additionally, spinach is a godo source of omega-3 fatty acids, niacin, pantothenic acid, and selenium. While this mixture of conventional nutrients gives spinach a unique status in the antioxidant and anti-inflammatory department, it is the unusual mixture of phytonutrients in spinach that "seals the deal" in terms of its antioxidant and anti-inflammatory components. In terms of flavonoids, spinach is a unique source of methylenedioxyflavonol glucuronides, and in terms of carotenoids, its difficult to find a more helpful source of lutein and zeaxanthin. The epoxyxanthophyll carotenoids neoxanthin and violaxanthin are also welcomed constituents of spinach leaves.